Last November 2012  the “Love Sees Beyond Differences” Adoption Advocacy Campaign was launched at the at the Social Media Lounge of McCann Philippines, Active Fun Bldg, Bonifacio Global City. The Inter-Country Adoption Board and McCann Philippines have worked closely together for many months to find creative solutions to encourage more Filipino families to openly declare their love for their adoptive children and help erase the stigma of adoption. 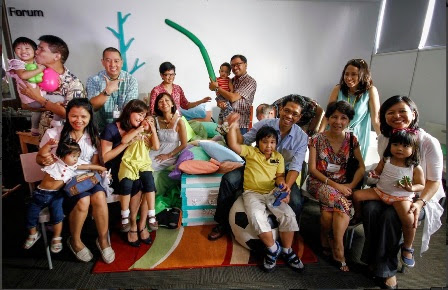 Adoptive Families in the Philippines

What is “Love Sees Beyond Differences?”

“Love Sees Beyond Differences” is the adoption advocacy campaign of the Department of Social Welfare and Development (DSWD), the Inter-country Adoption Board (ICAB) and McCann Philippines. The objectives of this advocacy campaign is to help reduce the stigma on adoption within families, within communities, in media and in our society, to encourage more Filipino families to open up their hearts and homes to Filipino adoptive children and to inspire more adoptive families to openly declare their love for their adoptive children.

The campaign was called “Love Sees Beyond Differences” because the proponents of the advocacy campaign believe that there is no real difference between adoptive and natural-born children. Parents face the same issues and challenges with adoptive and natural-born children. Adoptive families are no different from the “regular” families. The decision to adopt comes from an overflow of love between husband and wife. At the heart of it, a deliberate choice to love a child, not his or her own, like any parent would love a son or daughter. It is a love that sees beyond differences making it something that should not embarrass, instead, something that adoptive parents should be proud of.

DSWD Undersecretary Parisya H. Taradji, ICAB Alternate Chair, says, “Through this storytelling event, we hope that more adoptive families will volunteer their time and talent to this advocacy campaign. The adoption process has numerous adoption-related challenges and concerns which needs the participation of adoptive families.”

Storytelling can be an effective tool to introduce one’s adoptive child to adoption. According to Cecile Gabutina-Velez, Managing Partner of McCann Philippines, these e-books were created to equip adoptive parents with tools that will help them openly share their adoption journey with their children.

The programs or activities of this Adoption campaign advocacy

Senator Pia Cayetano also shared her own personal experiences with her foster son, Lucas. The event was capped by a synthesis of all experiences by Ms. Pilar Tolentino, Executive Director of Center of Family Ministries (CEFAM)

To inspire more adoptive families to openly declare their love for their adoptive children the proponents launched these ebooks. Part of this declaration of love begins at home when the parents start telling the story of adoption to their Often, this story is called “the day we met” story. It is one of the most challenging stories to tell an adoptive child.

These are the first-even written and illustrated Filipino eBooks for Filipino adoptive families. These were designed and written by the creative team of McCann Philippines. These eBooks will be available free to download at www.iloveyouanak.com.

What are the titles and storylines of these 7 eBooks?

The advocates would like to see more Filipino musicians and artists, specially, members of Organisasyon ng Pilipinong Mangaawit (OPM) writing and singing more songs like “I love you anak.” They would like to see that song sung in different dialects and languages and played more often in AM and FM radio stations. They would like to see more writers and illustrators writing children’s storybooks on adoption.  Also to organize more adoptive families sharing programs in local communities and schools. And most important of all, the advocates want to get more Filipino adoptive children into the homes of Filipinos!