It was year 2000 when I had my first mobile phone. That phone is a two-liner phone messaging with backlit monochrome. I recall during those times, when sending special messages for birthday or any occasion to virtually impress the recipient, I use colon, open or close parenthesis and other special characters. Now with the innovation of modern mobile phones and applications, features like colored screens, 2D, attractive, and animated emoticons makes text messaging so user-friendly, fun, and interactive. These awesome features can be found in WeChat Stickers.

WeChat Sticker is ANIMATED stickers, comprising with Viber, LINE, and their stickers are static stickers. WeChat is the first one to launch ANIMATED stickers in the world along with the new features in the recently released of WeChat 5.1 upgrade this 2014 such as WeChat games, bigger bucket sized group chat, and StoryCam which I already mentioned in my previous post.

How to access the WeChat Stickers? There is a special section dedicated to an arsenal of animated stickers—ranging from the quirky Onigiri & Friends to the adorable bunch of Hello, Crayon. You can easily unlocked these features with one tap of the ‘+’ keyboard button or the ‘Me’ tab. From the emoticons, WeChat’s new sticker personalities are the faces of WeChat Philippines Iya Villania, Drew Arellano, and Vice Ganda.

Iya the Wide-Eyed Charmer – Sticker Shop’s Elise is the Australian-born Filipino TV personality Iya Villania’s persona. Like the animated blonde girl who has a knack for baking, Iya’s knowledge from culinary studies has made her win over people with the dishes that she serves up. Iya is a distinguished host in local shows ASAP and MYX, singer, model, and you’ve got a power-packed female in a sweet package, very much like Elise who is Sweet Town’s muse.

You can use an adorable Elise emoticon and pick the expressions to extend your feelings to thank, say “No”, feeling mad, sleeping, cold, in the mood for cleaning, thinking, cooking, or just feel like dancing. The “Thank you” emoticon of Elise is simply the sweetest I found.

Drew the Hyperactive Furball – Sticker Shop’s Emoticats are hyperactive group of feline friends. Like the American-born Filipino actor and TV host Drew Arellano who loves adventure and travel, the charge-up and cuteness of these emoticons will surely stir up with your daily activities. I have watched Drew in GMA news TV “Biyahe ni Drew” and I can say that he breezes through life with an active mindset whether he’s in the ziplines of Pagudpud, Antique, and Bohol, or plunging in the waters around Siquijor, Camiguin, and Sarangani, he’s totally cool. Also, Drew has Aha show in GMA 7.

If you feel in-love, playful, down, mad, or game for just about anything then you can just catch these emoticats and send it to your friends to initiate the real cuteness and fun.

Vice the Feisty Character – Sticker Shop’s Cynical Rabbit is that fatally attractive friend with an opinion about everything. It only takes one punchline from Filipino comedian and TV personality Vice Ganda to make you realize how much he channels Sticker Shop’s Cynical Rabbit. Just like the Cynical Rabbit, no wonder why so many people are following him, it is because they are amused with Vice Ganda’s polarizing humor through observational comedy and sarcasm found in local shows Showtime and Gandang Gabi, Vice!, and in some of the all-time highest grossing films in Philippine cinema including Girl, Boy, Bakla, Tomboy, The Unkabogable Praybeyt Benjamin, and This Guy’s in Love with U Mare!

These Cynical Rabbits just made me smile with its reality check expressions. If you wanted to share some laughter then feel free to use this. I can’t stop smiling and laughing seeing a disturbing expression of the Cynical Rabbit who can’t sleep moving back and forth, falling from the bed showing paranoid gestures.

As a WeChat user, you can browse through Sticker Shop to get a hold of your own WeChat sticker personality. There are so many personalities that you can find in the sticker shop. Some are free and others have a charge price of around Php 40. I spotted some popular stickers such as Toy story, Spongebob, Mickey Mouse, Monster University, and Garfield. Isn’t it so cool? 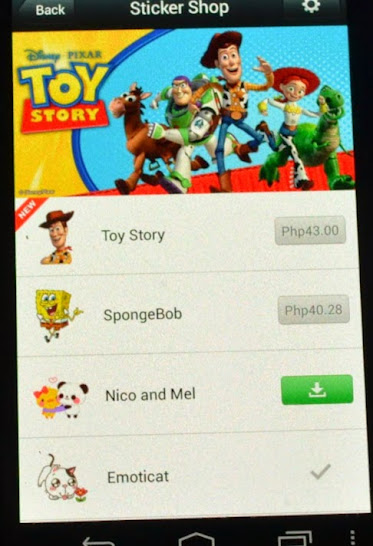 Using WeChat sticker is a fun and interactive way of communicating and sharing our thoughts, expressions, moods, or simply just about anything that we want to show. What’s your WeChat Sticker Personality?

WeChat is an innovative mobile social communications application designed for smartphone users. WeChat is free for download from app stores running on iOS, Android, BlackBerry, Symbian and Windows Phone operating systems*. It is the most downloaded mobile social app in many markets, with more than 100 million registered accounts in international markets.

WeChat users can add friends via a wide range of innovative actions and methods, including scanning QR codes, connecting users’ phone books and activating location-based functions such as “People Nearby” and “Shake”. The platform enhances social interaction by supporting exchanging of text, voice and video, stickers, and photos with their friends over data networks or under Wi-Fi environments. Users can choose to communicate one-on-one, or within their closed social network through “Moments”.

*Some features are limited to certain operating systems due to the product development cycle.